eschewing our gender, yet again

Now dissertating in earnest, it is time to read N. Katherine Hayles' How We Became Posthuman again.

Hayles begins her story with a prologue on the Turing test. What everyone knows about this test is that it has become the litmus test for identifying the moment when machines become "intelligent" (intelligent=ability to fool human beings, which, all things considered, is a pretty poor benchmark but, zenme ban). What no one remembers is that there were two versions of the test in Turing's proposal, the first being that one would interact via computer terminal with two unseen entities, and depending solely on the electronically transmitted responses to your questions, you would determine--not which was human, and which machine--but which one was a woman, and which a man.

"If your failure to distinguish correctly between human and machine proves that machines can think," Hayles asks, "what does it prove if you fail to distinguish woman from man?"

Andrew Hodges, a biographer of Turing, argues that the intent for inclusion of gender test is to show that gender, unlike intelligence, is in fact dependent upon unalterable physical reality. Hayles disagrees; the cases as presented are parallel, and point to a willingness to define gender in terms of symbolic manipulation similar to intelligence.

All of this reminds me of the hermits' marvelous diversion, the “gender genie” test, a kind of variation of the Turing gender test. What does this say about gender and identity? I fooled it successfully, and rather grandly—now I am a man? No; but it does tell you something interesting about my identity, that is, I am a woman who can successfully represent myself through verbal/semiotic markers as a man. And perhaps that is interesting.

The crucial move, as Hayles points out, is “distinguishing between the enacted body, present in the flesh on one side of the computer screen, and the represented body, produced through verbal and semiotic markers constituting it in an electronic environment.” And this, BTW, is the advent of the cyborg... Why? Because technology is the bridge connecting the physical and represented body/ies. The test requires disjunction, therefore: “What the Turing test 'proves' is that the overlay between the enacted and represented bodies is no longer natural inevitability but a contingent production, mediated by a technology that has become so intertwined with the production of identity that it can no longer meaningfully be separated from the human subject.”

And, of course, Gender Genie's verdict on the above:

Female Score: 428/Male Score: 701
The Gender Genie thinks the author of this passage is: male! (and in any case, definitely cyborg)
Posted by JTB at 1:52 PM 8 comments

Occasionally it's really good to dive back in to the CofC world I grew up in...the world of cushiony pews and crowds of people and large carpeted lobbies and institutionalized quirks. It's been a long time since I'd attended a large, mainstream CofC and I'd forgotten some of the charming idiosyncrasies common to our gatherings. The hearty round of hacking coughs after the miked "Amen." The way people dress for each other. The agonizing greet-your-neighbor session that is the CofC version of passing the peace. The peculiar musical aesthetic of hearing the melody line of every song an octave below what's written. The way the men line solemnly up at the front of the church for the Communion trays and then troop out symmetrically down the aisles and weave in and out in this complicated-looking sort of symbiotic dance (ahem, choreography) with each other, and how Communion trays simultaneously and mysteriously appear from the back of the auditorium to speed the process (can't spend too much time communing with God and each other, it's boring, there's nothing happening up front).* The screens at the front of the auditorium with the fun graphics...

During the service at the church I went to a couple Sundays ago, they apparently regularly take time to recognize specific ministries of the church and thank the people who serve in them. That Sunday it was the coffee and donut ministry (an all-around important service, I say, with great great sincerity. I'm thrilled that CCfB is now initiating a coffee and bagel table and hey, thanks to Cara, Ashlea and Regina for doing this!!!). So anyway, up on the screens in front there was a large graphic to announce the name of the ministry, show some pix of people, etc., and to the right there was a graphic of a white church with a steeple in front. As the thank-you progressed, a large donut hurtled down from the "sky" and ringed the steeple (visualize this, people! Come on!) and stayed there for the remainder of the announcement...and no one laughed.

A thought: perhaps now that we too have a screen, CCfB can borrow this graphic when it's time to publicly thank our bagel and coffee people?

A final note. I enjoyed the sermon, although it was definitely a message for a large suburban CofC. The main theme, that the US is now a "mission area," based on the observation that church involvement in the US is declining while it is growing exponentially in areas such as Central and South America, Africa, and China is probably indisputable. But what I wish I had heard more of is, what kind of a mission area is the US? Is it a mission area of unchurched people totally ignorant of Christianity? Hardly. If the US is a mission area it is one unlike our usual conception of the term; it is a mission area comprised of people who are so Christianized that they've forgotten what that means, and who didn't notice when their religion got coopted and politicized and economized out of existence. So maybe we're in the middle of a mission area, sure. But it's a mission that requires a kind of Christian message we've never preached before--here or China or anywhere else.

*I did however have a nice thought about the lateral passing of Communion trays between laypersons. It has the potential to embody an implicit message of equality and fellowship between brothers and sisters in Christ. If, say, we repeated the words of institution to each other as we handed on the tray, perhaps even broke the bread for someone else rather than ourselves, rather than taking the tray while avoiding eye contact, breaking the tiniest possible crumb and munching it in imagined total solitude. 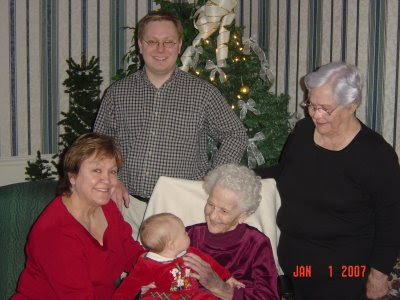 Brent's great-grandmother, Zada Belle Gravette, died this afternoon. Above is the picture we took during our visit this past Christmas--our five-generation picture. I like this one the best of the bunch because you can Nanny's smile. I always thought she had one of the best smiles ever. She smiled a lot, too, and it was always a kind of gift.

I didn't know her well, and only got to know her towards the end of her very extraordinary life. But I liked her a lot. I think it was impossible not to.
Posted by JTB at 8:02 PM 1 comments

a cool thing I did

A couple months ago I knitted the coolest thing ever. I got the pattern from Knitty (and I found Knitty through Brian). I have enough yarn left to make another (and perhaps even more) so pretty soon I will make one of these for Clare. But the first one belongs to Baby Sylva...Happy 1st Birthday! 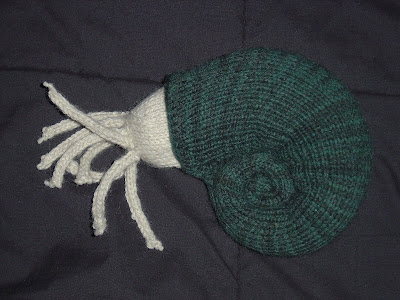 Email ThisBlogThis!Share to TwitterShare to FacebookShare to Pinterest
Labels: knitting

Clare's first day at The Children's Garden. And my first Dissertation Day.

How did we do?

Well, Clare didn't notice when I left, being engrossed in some new fascinating toy she'd never seen before. There was no agonizing tearful scene or anything. She loved playing outside, they said, and ate all her strawberries and most of her crackers right when I said she would get hungry. But she wouldn't go down for her nap. And she's got a runny nose. (I don't think this was childcare cause and effect--I have a runny nose too.)

I did not do quite so well. I did re-read my proposal and was pleasantly surprised at how organized my thoughts seemed, and how intelligent it sounded overall. Oh yeah, I thought, this is what it's about--good thing I read this thing again so I could jog my memory. And then I covered about 40 pages of Andy Clark's Natural-Born Cyborgs, which I'm finding quite congenial so far.

Then I took a shower--something I still find quite difficult to schedule in on a regular basis. It's amazing what a baby does to the logistics of personal hygiene. (Not to mention the motivation--after all they don't care if your legs are hairy or your armpits smell.) Then I went to the grocery store because there was nothing for Clare to eat for lunch, and bought lots of bananas and stuff. Then I picked her up. And that was that.