why don't they just leave (once again, sigh)

It must really suck to have this aimed at you from both sides of the Great Divide: those firmly within the CofC, and those who have left and don't understand why everyone else just won't grow a pair and do the same.

Those of us who, like Paul Tillich describes, are "aliens" within our own churches (his summation of the existential predicament of theologians) are pretty used to hearing this occasionally from CofC people who are tired of putting up with us and our tiresome oddity and annoying vocality. Certainly I've heard it enough, as this blog's archive testifies. If you decide to dwell within the CofC as alien anyhow, you learn how to screen this out--or at least, armor yourself against the hurtfulness of it. I imagine that the HU students & alumni who comprise the HU Queer Press anticipated this kind of reaction from the pious faithful. In fact--the overall message of The State of the Gay seems to be a response to this question, an answer to that reactionary attitude: Why don't we just leave? Because we're part of you--and we always have been. And because we're invested in making this community that we're all a part of a better one, for everybody.

In case there were any doubt about this, the latest statement from HUQP ought to clear it up. Demanding that hate mail to the HU administration cease, HUQP writes:


We are frustrated that others would pervert our message of compassion and open dialogue by speaking with hate and violence. We wish to create a better campus for all, queer and straight. This cannot be achieved by alienating or attacking those with whom we disagree. Anyone who uses or advocates violence, in word or in action, has completely misunderstood our zine's message.

And they end the statement with this:

It is the same message I tried to express after a couple years of wrestling with the emotional aftermath of a truly awful experience in a CofC, in which I felt personally targeted and deliberately ambushed--despite having said and done nothing to express any of my heretical theological views within that church community. You can read the full blog post here. But here's an excerpt:

I've wondered if I really should just give up, and go away. I can't count how many people over these intervening years have asked why I don't--students, friends, family, colleagues. My answer used to be that this church is my home; how do you leave your home? But that Sunday I wondered for the first time if maybe my home might leave me, instead. Later, in defiance, my answer was, why should I? This is my home, too. Then I wondered if it was true that my presence was divisive and harmful to the church, an act of self-gratification and arrogance. I began to be afraid that I really was the kind of person described in your sermon.

For a long time, that was my fear: that my sincere wish to remain a part of the body of Christ into which I was baptized and raised in the faith would be divisive and contentious no matter what I did or didn't do, because of what I do (or don't) believe on this (or that, or that other thing).
But now, I know what I will do next time I'm in the neighborhood. I will be walking through those church doors. I will take a seat in a pew and I will sing, and pray, and listen, and contemplate scripture. I will praise God with you. Because I am certain now that it is not divisive for me to remain. It is a conscious act of unity.

So, I have to be "dangerously maternal" for a bit and relate this marvelous conversation with Clare from a few days ago. 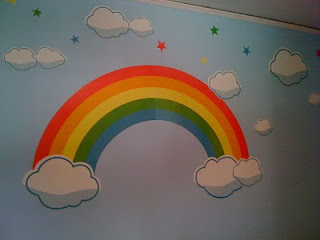 Clare's request for her new room was that it have rainbows on the walls. She asked for this months ago, so I called my interior-designer sis and got her advice, which was: wall decals. I found these online at a ridiculous discount--spent about $15 total for 2 packages of rainbows, clouds & stars. And so, last week, at the top of the unpacking priority list and second only to "find the damn dinner plates already" was, get the rainbows up in Clare's room.

And then I didn't do it like she said.

Instead, the wall opposite the one pictured above has 2 half-arches, one beginning in the corner and coming down, and the other coming out of the window. It looks great.

But it's not what she wanted. And she let me know. Like I knew she would.

She was super excited about coming home after school to see her rainbow room. And she walked in and saw the first wall: rapture. Then she turned and saw the second. And turned to me, mad face on, and said, "I don't like it." Pause. "It's not what I said." Flopped down in the chair, very prissy-pissed-off-princess. Longer pause. Then: "It's not all about you."

Oh, I knew it was coming. I was tired, I had put off other things to get this done, my arms ached, my back ached, I had spent all day putting together this beautiful room just for her...but she was right. I had asked what she wanted; she had told me exactly what she wanted. and I hadn't done it like she said.

So I said to her, "You're right. It's not all about me. What is it all about?" She looked at me and said. "Me. I get to give the instructions." Then, "You didn't do it like I said." And I said, "You're right. I didn't do it like you said. I did it this other way. Can I tell you why?" She looked at me darkly, but didn't object, so I went on. "I tried it your way, and the wall with the window is smaller than the other wall. It just didn't look the same and I thought it would be prettier this other way. I know it's not what you said, but I wanted to make your room the prettiest it could be. So I did it this way instead." There was silence. And then, after about a minute:

"Okay, mom. I see you had a good reason." Then: "I think I could like it." Then: "Those can be the baby rainbows hugging the window, and this is the mama rainbow smiling at them from over here."

I mean, damn. "You had a good reason"?! She's not even 5, and it took her about 5 minutes to process personal disappointment and outrage, listen and understand another point of view, and come up with some forgiveness and acceptance. I know so-called adults who can't seem to do that.
Posted by JJT at 9:22 PM 3 comments