did Jesus have a penis, II

Over on the newly resurrected kendallball (does this make .com the virtual heavenly body as compared to the old earthly .net?) there is an interesting post entitled "did Jesus have a penis?"

Now, that's just not at all what I really meant to say, so it's been bugging me. And the conversation at that point seemed to flag and I thought that no one was interested in pursuing the female point of view on the Jesus' penis question. Except for me, so I decided to blog about it here.

But lo and behold, the newly appellated Hermit Scott did ask me to elaborate, perhaps even in my own blog post. Which makes me feel happy. Especially since I intend to at least partially make good on a promise I made months ago over on Gay Restorationist, and talk about whether men and women are ontologically different (in my opinion).

What I really meant to say was, if Gregory of Nazianzus is right, and "what is not assumed cannot be healed," does it matter that the human flesh Jesus assumed was male and not female? Are women left out of the significance of the Incarnation? (Luckily for me, as an aside in the Wednesday TH 222 lecture, this point was phrased exactly thus, and I shamelessly borrow it here.)

Because the answer to the question is, yes, of course Jesus had a penis. The real question is how does this matter.

John Calvin dispenses with this with a curt, "Why, even children know that women are included under the term 'men'!" (Institutes, vol. I, 479. The immediate question Calvin is addressing is why Jesus can be accounted the Son of David when Matthew's genealogy is the line of Joseph rather than Mary...but his reasoning in answering this little dilemma is clearly germane to our question here).

This of course is less than satisfactory for me.

Whether or not it matters that Jesus had a penis and not a vagina, theologically speaking, depends on whether or not you consider men and women to be ontologically different beings. If you do, then the fact that Jesus was male means that he assumed maleness but not femaleness, and the question of whether Jesus can save women becomes critical. This might explain why, in the Christian tradition, women were often considered partial, or defective, males; and the gnostic Gospel of Thomas deals with this problem by teaching that women who are saved will actually become men.

This of course is less than satisfactory for me.

But the idea that men and women are ontologically distinct is a pretty common one. It is at the basis of all forms of "complementarianism," whether explicitly heirarchical or not. It is one of the bedrock convictions that goes unexamined in all churches that teach that women have a different (silent, invisible) role in the church than men.

I used to argue this with Brent a lot when we were first married; he has always held a much more "unisex" version of feminism than I have. But in the course of these discussions I have come to realize that what I really think is that the difference between male and female is not ontological, but simply biological. And while that biological difference is clearly formative, and perhaps could be called foundational to one's identity, it lies in the plane of physical contingency and not ontological being.

So, did Jesus have a penis? Sure. (Otherwise, how could we possibly have the relic of the Holy Prepuce?) Does it mean that he only assumed maleness, instead of assuming humanity? It all depends on whether you consider male and female to be so different that being one means completely excluding the other.
Posted by JTB at 9:25 AM 12 comments

Clare has got her first headcold. It's a little scary. Plus, really gross.
Posted by JTB at 11:25 PM 4 comments 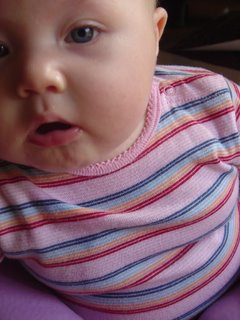 For the last decade or so of my life this question has periodically resurged. I expect it will for however many decades remain to me. Every so often the absurdity of the things I’ve staked my life on overshadows the ordinariness that belief takes on in the lived-out day-to-day. And when that happens I am forced to confront it. To stop and ask, do I really believe this stuff? Do I, really?

Sometimes this is just a flash of feeling, and sometimes it lasts for a day or so and then subsides. Madeleine L’Engle wrote of “days of disbelief.” Sometimes it lingers for a while longer. I’ve gone for long periods of time, years probably, without really knowing or daring to hazard an answer to the question, because the answer might honestly be no. I’ve known those who, finally, did have to answer no. I find it brave, even admirable, though not at all enviable.

I don’t know what “blessed are the poor in spirit” is really supposed to mean. But when I hear those words I think of those who struggle to believe, who want to believe, and just aren’t sure they can.

Does this bug anybody? That an aspiring professor of theology must admit to periods of recurrent if temporary suspended belief? Because it’s just how it is. Maybe other people don’t experience this. Perhaps some believers remain confident and unshakeable from the moment of their baptisms, or whatever marks the beginning of their certain belief, to the end of their days. I imagine George W. Bush is one of these people. Maybe some people can pass through this world, so marked by tragedy and suffering and evil, and smile serenely and continue unruffled to bet on everything coming out right in the end and assert that that’s all that matters anyway. I am not one of these people.

Quite frankly—oh, let’s just go ahead and be rude—these people really fucking bother me.

I find that I cannot respect a faith that hasn’t questioned itself. Repeatedly. Because once you face the necessity of that questioning, you see that the question is never settled with any sort of finality. At least, not on this side of death. I can’t respect a faith that doesn’t recognize the very real possibility that it could become unfaith.

Faith is not measured by intensity of fervor, or even unshakeableness of resolve. Faith is simply flinging yourself forward into life—sometimes an abyss, sometimes a mountaintop. Sometimes you don’t know why you go on. And that, even at its most unreasonable, is faith at its purest.

postscript: go read Theoblogia today too.
Posted by JTB at 9:36 AM 11 comments

Feminarian has some powerful words today: "Thoughts on an Anniversary."
Posted by JTB at 4:33 PM 1 comments 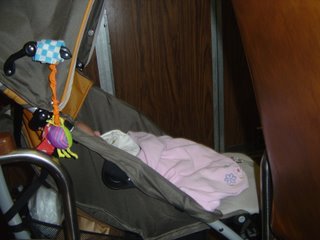 This Sunday Clare and I made our first trip to church by train. You can't really tell, but that's Clare in the stroller on the train.

Ah, the stroller. I took it because in addition to Clare and the requisite diaper bag, I was carrying my contribution to our monthly meal together: Thweatt rolls, a full Thanksgiving-sized double batch. I figured being able to put them down under the stroller seat and push Clare along would make things a great deal easier.

But in a city strollers are like cars--really convenient and helpful when you're actually moving and covering some distance, and really sucky to deal with all the rest of the time. I knew I had some stairs to contend with, but I also knew other people in NYC used strollers--I've seen them on the subway, I know it's possible to get your stroller down there. But this was my first stroller management experience. So I didn't know (till I asked for advice and received an extremely helpful tip from Laura) how to really handle the get-the-damn-stroller-up-(or down)-the-stairs hurdle.

But at every flight of stairs and at every elevator, train, and subway door, someone was ready to help. 12 people in all ready to hold the door or grab the bottom of the stroller to help lift it and carry it up or down the stairs. And it wasn't until I got to church and started thinking about it that I realized every single person who stopped to help me was a person of color.

Maybe it's a fluke but it seems astonishing to me. I'm no social scientist and this of course is not any kind of well-designed social experiment: this is just me not being able to handle my baby vehicle. And one trip is hardly representative, I'm sure. But I'm keeping my eyes open the next time I take the thing to NYC (not anytime soon--Clare may be heavy but at least in a sling stairs present no major obstacle) and we'll see if the experience repeats itself. Even though I now know the easiest way to get a stroller up or down the stairs is to pick it up and carry it myself.
Posted by JTB at 8:58 AM 1 comments