this is only a test

I just sent my text on transhumanism off to an H+ blogger I struck up an email correspondence with pretty much out of the blue. He's been marvelous to chat with and seemed very willing to look over my stuff for accuracy. And although I initiated all that, I felt very reluctant to take action on it. I sent the chapter to vH over a week ago, but only now have I managed to hit the "send" button to email it to my virtual acquaintance. The reason for my reluctance is the same reason I thought it would be a good idea to ask for his opinion in the first place: I remain very critical of the H+ movement, but I want my description of the movement to be accurate and fair--beyond that, even, a good-faith effort to portray the movement sympathetically. I feel like this is putting into practice the basic principle of interdisciplinary engagement. I'm not interested in picking the easiest target to shoot at, because that doesn't produce a very helpful or a long-term dialogue. There are some real and substantive issues to be gotten at, and beating up straw men doesn't get you there. Sending the text to be vetted feel really risky, a personal test of scholarship and integrity. And like any test situation I am nervous. Will I pass? I did my best, was it good enough?
Posted by JTB at 11:40 AM 3 comments

People sitting on the toilet can say with all validity “everything in my life has led up to this moment” but that doesn’t mean their destiny is to sit there and take a crap.
Posted by JTB at 12:32 PM 2 comments

have I stumbled into an alternate reality

or some kind of parallel universe, or perhaps just some crazy hallucination from which I have not yet awoken, or become the unreliable narrator of an SF novel?

Because the air of unreality around me keeps building: we've elected our first African-American President? There's really water on Mars? We have actual proof of planets outside our solar system? I actually finished a draft of the chapter that's been two years in the writing?

Which one of these things is even the most unbelievable at this point anyway?

If I heard an NPR story this morning about first alien contact, I'm not sure I'd even blink. I would, however, hope that those aliens are part of my blog audience.
Posted by JTB at 9:58 AM 0 comments

Email ThisBlogThis!Share to TwitterShare to FacebookShare to Pinterest
Labels: dissertating

once upon a time

Clare has started telling stories. It's cute. But now that she's learned that there is such a thing as narrative, everything must be processed through it. This makes for long bedtime routines wherein we recap everything Clare did that day. Her signal for needing this is to beg: "once upon a time, Mama, once upon a tiiiiiiiiiime?" Whereupon I sigh, and begin: Once upon a time, there was a good brave smart funny cute little girl named Clare, and she..." did whatever she did. It's an unlooked-for reminder to me how important narrative is for all of us in the construction of our personal realities, Clare's insistent need for narrative and the re-telling of her own life to herself. Usually she still prompts me to do this for her, but she has started telling her own stories. They usually involve teachers at school (Miss Melissa is a star protagonist) and sometimes friends from school. A couple days ago on the way home she told me this story: "Once upon a time, Clare go to school, and Emma bite you. Playing in the kitchen, pink plate, blue, yellow. I want yellow. Emma's. Emma bite my finger. Clare say I sorry Emma." She's been telling versions of this story for two days now, and I'm still unsure exactly what went down. Someone bit someone's finger, and that finger was probably Clare's, but it's Clare who says I'm sorry to Emma...so somewhere something seems to not fit. And herein lies the delicate necessity of parental investigation of fault in an unwitnessed conflict. But I am also too aware of how influential my narrative structures become on Clare's unformed stories: once I articulate a version, it becomes the official narrative...so if my interpretation is wrong, it changes how Clare constructs her narrative reality as a result. What really happened, and who bit who, will forever be a mystery. But never fear: the story ends well. When asked if Clare and Emma are still friends, Clare's answer is yes. Will they play together in the kitchen today? Yes. Will Clare forgive Emma for biting Clare's finger? "I forgive you Emma" says Clare to the empty air--thus constructing a fictional scene of reconciliation which nonetheless becomes her reality, as we drive to school.
Posted by JTB at 11:47 AM 0 comments 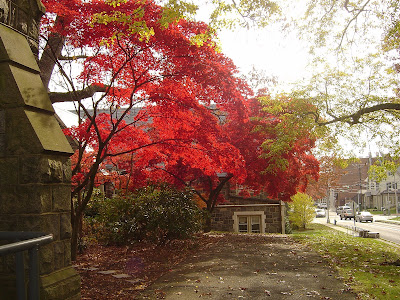 Took this right after voting, in front of Calvary Church. See? Even the trees were full of hope that day! Well, it's no GKB photo, but sometimes you don't need talent to capture beauty. ;)
Posted by JTB at 9:33 AM 0 comments

A few days ago, Joe emailed to see if I would be willing to lead a prayer specifically about the change our country will undergo with the election of Obama as President. I let things simmer on the mental back burner until Sunday, when I scribbled out what I thought I wanted to say to God about this past week on behalf of the community at CCfB. It's kind of an awesome thing to pray communally, especially in a tradition where you don't necessarily have the resources of a Book of Common Prayer to reach for when you need words. I often go to the BCP when working on prayers for CCfB, but this time--regarding this momentous occasion--I wanted words of my own, to speak from the heart (though not, clearly, from the hip, so to speak. Heh heh.)

We know that you are with us, throughout our lives and in the turning points of history. We thank you for this determination to be continually present with us in these moments, and we pray that we will always be aware of and responsive to your gracious presence.

We pray now for the future of this country and for the world: for your creation, and your creatures within it. We pray that the leaders newly elected and appointed will govern with wisdom.

But even more than for President-Elect Obama and the newly elected leaders in Congress, we pray for ourselves, the people of this nation: those born here and all those who live here. We pray that we will lose the vocabulary of victory in our conversations with one another, knowing that all human achievements, even the most stirring, are transient and imperfect; true victory, and true justice, remain in your hands. Give us humility.

And while we rejoice in the symbolism of electing our first African-American president, we pray that we will not be satisfied with symbolism only, but that we will be energized, empowered, and determined to break down the boundaries between us that should never have been drawn. May we transgress those boundaries joyfully, and without fear.

We pray these things in the name of Him through whom all things are possible, your son, Jesus Christ. Amen.

and so it begins

The mantra seems to be that we as a people have again affirmed the American Dream narrative in a new and rather more significant way: that anyone can indeed become anything, whatever they want, in this country. Well, that plays well. An oldie but a goodie, and everyone knows how to dance to that tune, so I reckon we should just go with it.

But for me personally, the major achievement represented by the election of a man named Barack Hussein Obama is somewhat different than the above. I just heard an exchange on MSNBC with some guy named Tucker Carlson who kept insisting that celebrating the election as "historic" (meaning, it's important that we have elected our first African-American president) tends toward the implication that all those who didn't vote for Obama now find themselves on "the wrong side of history" (an interesting new euphemism employed in this conversation to avoid using the blunt label, "racist"--because despite it all, we still cannot discuss race and racism in this country without euphemisms). Carlson insisted on also at the same time interpreting the election in pragmatic terms--that many people did not self-consciously cast "a historic vote" but simply a vote for the candidate that they agreed with, whose policies they judged to be right for the country, so that people "on the wrong side of history" aren't made to feel like racists.

I think he's right at the same time that he's wrong.

The real achievement of this election is that people did cast a pragmatic vote for the candidate they agreed with, whose policies they judged to be better for the country--and that this judgment could be made across multiple demographics without necessary reference to the identity category of "African-American." To separate the pragmatic from the historic vote is a mistake, because it misses the point that up till now, a black man was always black first, and then whatever else second. Now we have proven--not just to the world, but to ourselves as a country--that we can put aside the category, the label, the box, and make a judgment based on more than that.

This is the real achievement of the campaign itself, and it would have stood as monumental even with a loss at the end of it, though it would have been harder to see, and harder to celebrate, without the final vindication of a win.

I'm not saying that it doesn't matter that Obama is the son of a black Kenyan and a white Kansan. It does--but it doesn't matter in the same way that it would matter in the old, constricting framework of identity politics as usual. He didn't win because he was black. Neither did he win despite being black. I think enough Americans experienced the breakthrough that this fact of his biography did not preclude a common vision, did not mean that he could never see from a white person's point of view, that a white person could never see from a black, or Hispanic-, or Asian-American, or even international point of view. We can, at least in part, if we choose to try. We can relocate our gaze, in a gesture of kinship. This is the change that has become real, because we finally believed enough in the possibility to choose it.
Posted by JTB at 10:30 AM 4 comments

I voted...Clare will be proud of her mama. 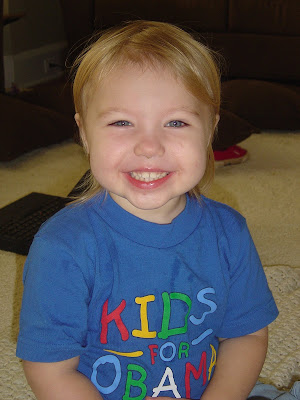 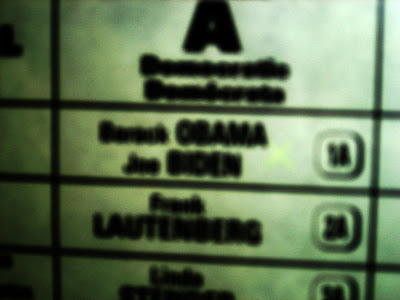 below is Ameritocracy.com's compare/contrast of the candidate's statements on various issues. Hopefully the links will work and connect you to ameritocracy.com's collective judgment on the accuracy/relevance of each quote if you wish to check it out. Because now the clock is really ticking...and you have until the polls close in your area to make up your mind and vote.

THE RUNNING MATES' ON THEIR OPPONENTS
Posted by JTB at 10:19 AM 1 comments