this week is CRAZY LOCO!

So, Brent's week is crazy, my week is crazy, and Clare is thankfully oblivious. Oh for the simplicity of a toddler's life, where the only major academic achievement on the agenda is mastery of the ABC song. Not that I'm belittling this. This is major stuff. That girl can memorize like nothing I've ever seen. I probably should get her started on the Gettysburg Address or something.

Crazy item #1: Bonus opportunity to collaborate with my favorite feminist theologian! On feminism and cyborgs and spirituality! Yay!

Crazy item #2: AAR deadline thankfully extended to March 1 but dreadful pain in the ass trying to make a paper proposal on transhumanism align with my interests in the posthuman.

Crazy item #3: AAR deadline basically simultaneous with ACU deadline for September lectureship class topics/titles/description. Theme for '08: Righteousness of God: Exploring Romans. (Rats! Why didn't I take that Jimmy Allen class years ago when I was at Harding?) Ah well...no matter, I'm talking about cyborgs anyway. Don't believe me? Just wait. Assuming they don't take a look at my class titles and revoke the invite for reasons of sheer lunacy.

Crazy item #4: received my copies of the Leaven issue with the Canaanite woman sermon in it. Wow!

Crazy item #5: received word from the Christian Scholarship Foundation that they have renewed my grant for next year, and even more generously. Wow and wow again...and many, many thanks. It's not exaggerating to say that without this support, the dissertation would not be happening at all. I'd be waiting tables with Clare on my hip.

Summation: crazy GOOD. It's not only encouraging to have good work to do, but wildly affirming to hear an offer of collaboration, and be published, and of course, receive funding from people who have enough trust that what you're doing is worthwhile that they're willing to meet the bottom line for you.
Posted by JTB at 10:53 AM 2 comments

Not quite live blogging the debate here. We don't get MSNBC, and going to msnbc.com on Brent's computer resulted in unflattering frozen expressions, multiple reboots with requisite annoying commercials, and a lot of time sitting and staring at the words...

Oh, we're back. So my first thought on the debate is, MSNBC sucks. Thanks a lot for taking an event of national political import, something which could potentially affect an enormous amount of people, and refusing to make it as widely available as possible to all people in multiple venues in favor of keeping the broadcasting rights all to yourself. Lovely! What does this say about the intersection of capitalism and American political process? Sure, NPR will broadcast the debate...starting at 11 pm. Gee, that's convenient.

So mainly, I'm hoping that nothing really important happened because despite intentions and a decent amount of effort, I didn't get to see it.
Posted by JTB at 10:47 PM 1 comments

It was such a privilege to participate in Joshua's dedication, and to pledge along with everyone else that we, CCfB, with God's help, will be Joshua's church family and nurture him as he grows in maturity and faith.

And as others have done before me (I remember a moving Communion meditation from a couple of years ago from Erin), the language of family was uppermost in my mind as I pondered the meaning of Communion this week:

When we take the time each Sunday to celebrate Communion, we recreate
together the night when Jesus first sat at the table with his disciples, and
broke the bread and drank the wine with them in the intimacy of a family eating
dinner together. These men and women who followed Jesus, learned from him,
ate and drank and talked and laughed with him, who left their homes and all that
they had out of loyalty and love for him, were his family. Jesus has said
so; earlier, when he’s told his mother and brothers want to see him; he looks
around at the people who have chosen to gather around him and says, this is my
family. Today we honor Trish and Ehi and the new family they have created,
by choosing each other and choosing this child, Joshua; at the same time, we
affirm that we are also family, all of us in this room, and promise to be that
family for Trish and Ehi. We have done this many times now; for Jasper,
for Ira, for Clare, for Annalise, and now we are privileged to do so again for
baby Joshua. This is the reality of what it means to be a church. It
is the family of God, and it is no coincidence that Paul calls us brothers and
sisters in Christ, and adopted children of God the Father. This language
of family is not casual. The language of family extends even to our
language for God. When we call God Father, especially as we prepare to
share in this meal together, we also call Jesus the Son. And when we
consider what it means that God the Father would call Jesus the Son to the
awesome responsibility of teaching and leading, and ultimately dying for and
rising up to new life again, for the sake of us—his adopted brothers and
sister—we see that the metaphor of family defines not just how we relate to each
other…but how God has chosen to relate to us.

Jesus looked around
at his family and said, “Take and eat; this is my body, broken for you.”
And he said, “Drink this, all of you; this is my blood of the new
covenant. Do this for the remembrance of me.” As we do this together
today, we remember and recreate and affirm those acts of sacrificial parental
love, of God the Father, and Jesus the Son of God, which make us all brothers
and sisters and children of God.

Watching the Obama SC victory speech, I couldn't believe, even while experiencing it, that the Bob-the-Builder slogan chanting was so powerfully moving. What is it about "yes we can" that works?

When I blogged about that speech later, I ended with a halfhearted sense that maybe I would think more about the theological anthropology of "yes we can." I have been pondering this on and off since then but I don't think I can blog about it. For one thing, I've got some other deadlines to meet (thank you AAR for extending the Feb 25 deadline to Mar 1!) and for another, I'm now officially sick as a dog.

But I have noticed that my own speech has changed as a result of this slogan. When Clare gets frustrated with the buckle on her high chair--a relatively new fine-motor-skill achievement for her--I don't say, "Mommy help," I say, "Yes you can."

In fact, I chant it. I'm waiting for Clare to start joining in. I want "Yes We Can" to be something she learns so early on that she never wonders IF she can be a part of making the world the better place we all wish it was. When she catches on--and I've no doubt she will, my little verbal genius--move over, James Brown. "Baby baby baby" is cute, but "Yes We Can" is hope.
Posted by JTB at 12:06 PM 0 comments

why I hate "You've Got Mail" and what has that got to do with ecclesiology? or politics?

No, it's not just because it happened to hit theaters just when Brent and I were starting to get serious with the emailing.

Honestly, I hate it because cute little Meg Ryan is all feminine-ly helpless in the face of male aggression--and the culmination of the plot is her seduction by the indifferent corporate villain and her assimilation into the children's section of a bland outsized bookstore. And we're supposed to be happy about it. Because, it's a romantic comedy. She falls in love, so it's all okay.

I, however, don't want to be assimilated.

I hope there are some folks out there who don't want that either.

Watching the Super Fat Tuesday coverage I happened to hear a news anchor sum up Huckabee's appeals to voters as "vote for me, I'm the candidate who's most like you." It seemed to be offered as a genuinely straightforward description, which made it all the more horrifying. In direct contrast to Obama's deliberate work to pull together a coalition that celebrates the diversity in its ranks, the strategy of "vote for me I'm like you" is revealed as a base xenophobic appeal. In my most polite and understated euphemism ever: YUCK.

If you were to talk about the nature of church, and the task of drawing people into deeper and more meaningful involvement in church, (is this the task? to get people involved in church?), what ecclesial vocab springs to mind? Incorporation into the body of Christ? Ingrafting into the kingdom of God? Full inclusion in the community of saints?

Or if we were really honest would we talk about assimilating people into our group so they'll be just like us?
Posted by JTB at 8:59 PM 8 comments

Okay, so I'm glued to the TV and here in a minute we'll be breaking out the scotch.

I just realized what it is that I like so much about Obama. He's the cyborg candidate.

Oh, I don't mean he's a wired up cyborg or even that he's more technologically savvy than anyone else (although Katie Couric's been talking all about how well Facebook has been working for the Obama campaign). I mean it in Haraway's political sense. Hybridity defying categorical identity, and therefore offering a promise of potential unity on the basis of something other than "natural identity." On the basis of something like common sense. Or even hope.

But you've got to think that it's possible. And that's the other aspect of cyborg thought that Obama embodies so well. Haraway's cyborg is all about agency. Yes, we can.

verdict: Laphroiag is a lot smokier and complex than Glenlivet.
Posted by JTB at 10:31 PM 5 comments

I like being tagged for blog memes, it makes me feel warm and fuzzy. Thanks, Krister!

The game is:
Pick up the nearest book of at least 123 pages
Find page 123
Find the first 5 sentences
Post the next 3 sentences
Tag 5 people.

Attempt #1: Haraway's Modest_Witness displays a painting by Lynn Randolph, "Self-Consortium," on page 123. Haraway uses quite a lot of Randolph's work in this text. Randolph also produced the painting below, entitled "Cyborg," in response to Haraway's famous "Cyborg Manifesto." 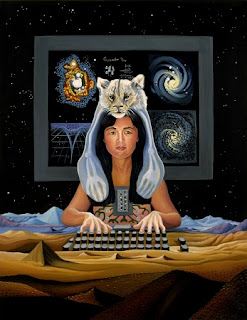 The third goal is to demonstrate what practical difference this counter discourse might make in respect to the formation and performance of Christian convictions within an emerging technoculture. This objective is completed in the final section by focusing on the central role of formative practices.

It was argued in the previous chapter that Christian theological claims about providence and anthropology are devoid of any meaningful content in the absence of eschatology.

My five: TKP, Mom, Em, Ally, Brent. Most of whom don't blog worth a damn anymore, but oh well.