Pancakes and Pickles.
Posted by JTB at 11:21 AM 0 comments

In a few minutes I will begin the task of prying Clare away from her beloved Dora and getting her dressed. Most days this can be tricky but today I know that I just have to say the magic words: "big daddy church."

See, she loves church. And, lucky girl, she has two churches to love now. Last week, we took the train into NYC and then hopped on the A to Brooklyn. And all the way she talked about going to the Brooklyn church. She told total strangers she was going to the Brooklyn church. She talked about Ira and especially Sophia, her five-year-old hero and idol. She talked about going to class. She even gave a spontaneous and only slightly garbled rendition of a song I recognized from the CD of class songs.

So today we'll get dressed and instead of a long train ride, we'll walk across the lawn to Calvary. She'll hold my hand and drag me along in her excitement, and we'll stop and say hi to the fish on our way to her classroom. Later I'll pick her up and bring her in for Eucharist, and we'll go up to the rail and she'll point and exclaim "Daddy! there's Daddy!" while I try to shush her. Then we'll sit back down and she'll look around in wonder at the large, beautiful space surrounding her, and be awed into silence by the organ music that still entrances her with its volume and grandness. And after church, we'll go out on the lawn and she'll see Cimi, whom I think she has a crush on, and she'll try to catch Martha the cat, who knows well enough by now to stay, if not out of sight, at least out of reach.

Then we'll walk back across the lawn, "following the squares," and we'll eat a quick lunch and then it's time for a nap.
Posted by JTB at 8:10 AM 2 comments 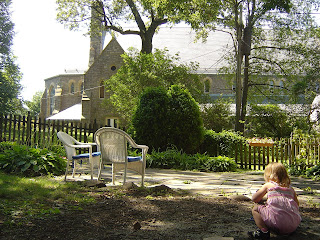 view of backyard from hammock: Calvary Church in the background, Clare is making her "mud soup" in foreground. 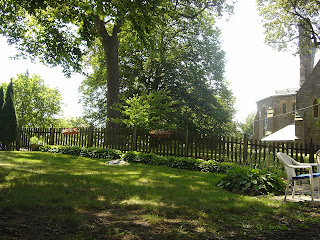 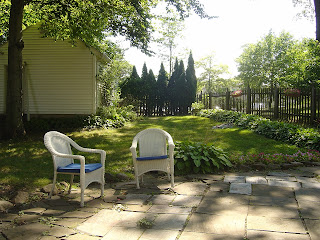 view of backyard from back door steps. 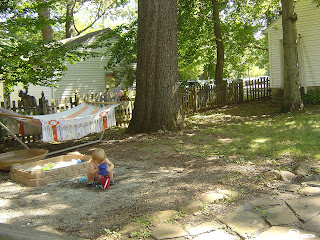 view to the left from back door steps: Clare's sandbox, my Honduras hammock & Clare, playing in the dirt in front of the sandbox. Some dirt is just better than others. 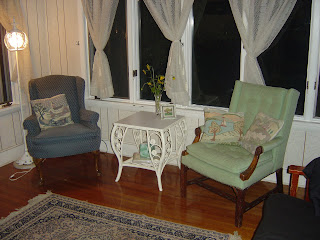 the sun room. still a little unfinished but lovely even so. my favorite room in the house, especially in the mornings, or when it rains. 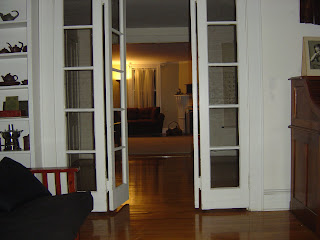 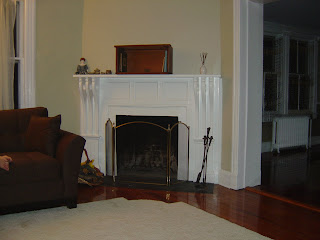 fireplace in living room. still need more books to display in the lawyer's case on the mantel, but Brent took all the cool old books to his office, and I figure a collection of battered RAH paperbacks from the 60's won't exactly cut it. 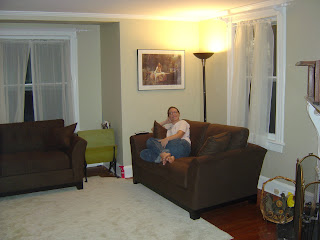 our new sofa & loveseat in LR 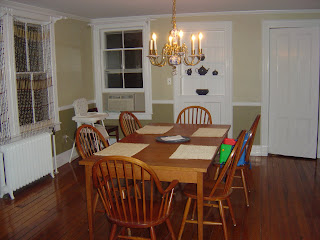 Exterminator visit today; more poison traps in basement. Some of those in the kitchen cabinets had not been touched, others, the bait was entirely gone. But since Brent and Cimi sealed up most of the holes around the pipes a couple weeks back, we're hoping that that will make a difference.

Yesterday I tried out First Art's recipe for silly putty. (Here it is: 4 T liquid starch, 8 T Elmer's white school glue, food coloring. Mix together and let set 5 minutes, then knead into putty.) It totally worked, though I was initially highly doubtful and in fact was planning to throw the strange, stringy mass away but it felt so weird in my fingers I kept messing with it and eventually realized that it was getting kneaded into silly putty despite my doubts. Clare loves it. Last night it was "green goo" but that morphed this morning into "googly." So pleased with myself I had to call my mother, who, as a former chemistry teacher, appreciates that sort of thing more than normal people.

I can't believe it's August; I need to plan for Brent's birthday, and also pull out my notes for the ACU Lectureship class in September and start working on getting my mind back on it. (I probably also need to think about finding a place to stay during Lectureship...oh how I hate logistical details.) It's amazing how these summer days can seem almost frustratingly long and lazy and yet there's still not enough time to really get things done. I think this is probably the result of overindulgence in procrastination.

So I've decided to reform some of my counterproductive ways: eat breakfast, put in my contacts (glasses are a liability around Clare nowadays, plus, it makes me feel less sloppy--even though I'm still just as sloppy, it's just a mental trick), do yoga during naptime, and make sure that Clare and I do at least one major learning-type activity each day, whether it's music or art or whatever, and lots of outside self-directed play (she loves digging in the dirt nowadays; a couple days ago she made "mud soup" which then turned into "rice and beans" as it got thicker).

We also have some pics of the house which I'll put up in another post, and some of the backyard, which is still gorgeous even though the lilies and the hostas are no longer in bloom.
Posted by JTB at 9:51 AM 2 comments

A couple days ago Clare looked at my armpit and said, "Mommy grow flowers!"

We've bought a sofa. I can't wait till Wednesday when it will magically show up on our doorstep. Microfiber, I love you.

Porn_website28 is now following me on twitter. Ick!
Posted by JTB at 6:29 PM 0 comments