a letter from my daughter from three days ago 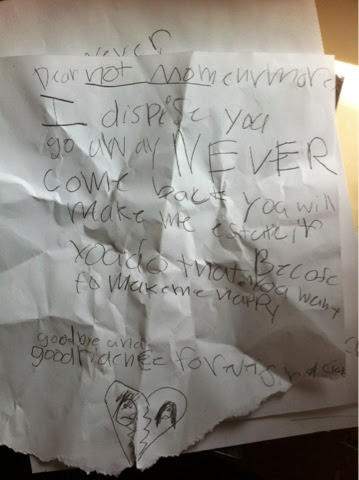 transcript (faithful to spelling and grammar):

Dear Not Mom anymore
I dispise you
go away NEVER come back
you will make me estatic if you do that. Becose
you want to make me happy
goodbye and good ridence forever
sined
Clare

I know it's a bit twisted but all I really feel in looking at this letter is a sense of bursting maternal pride at how well my 7YO expresses herself. #goClare

I'm blessed with a commute that takes me, three times a week, out of the WNYC station range just as I enter the WHYY station range, and in the mornings they basically play the exact same schedule so I can switch from one to the other without missing a single syllable of my morning NPR. It's awesome.

Except for the weeks when they run back-to-back fundraisers. That double whammy gets really tiresome. WHYY goes first and then, just as they end, WNYC cranks up. That can make for a long commute.

This last time, I found myself getting annoyed at more than just the repetitive appeals and aggravating interruptions to programs for their plaintive pitches. Usually I even find it somewhat mesmerizing, the smooth blather and wordsmithy that goes into the whole thing by these professional talkers... But this time, over and over, I heard something that really bugged me: a crude appeal to intellectual elitism that made NPR listeners, and a fortiori the elite of the elite who donate or become members, the "us" opposed to the "them," the ignorant hoi polloi who listen to (sniff) commercial radio. Every morning for about two weeks I heard some version of this on and off for an hour and a half. "We know that you, our listeners are intelligent and want to be informed" or "just think how many times you've been at a party and started a conversation with 'I heard on NPR' and immediately became the smart person in the room" or "take those few cents a day you spend at the vending machine and feed your brain instead" or "in personals 'NPR listener' has become code for smart and cares about the world" and on and on. The longer I listened the more appalling it became.

And then one morning I found myself shouting back at my radio, "NO! I mean, shouldn't public radio be for everyone???"

This was a few weeks ago now so I'm not exactly timely in blogging about it, but it's been simmering on the mental backburner ever since. We spend so much time lamenting the fractured, ideologically driven state of mainstream media in this country--and the way that it both reflects and furthers the epistemological divide in the public. And one of the things I heard from both stations is how public radio, because it is non-commercial and primarily listener-funded, stands apart from the rest of mainstream news media in this ideologically and commerically driven epistemological division. Except that, if you're simply recreating another split, how can you pat yourself on the back for standing apart?

So next time, let's remember: public radio is for everyone. Even, and maybe especially, for the folks don't listen to it. Yet.
Posted by JJT at 1:58 PM 0 comments