So Clare has this little coloring book app on the family iPad. It's a little young for her now at 7 but she still enjoys it. It's full of pictures of fairies and princesses and elves and such.

This morning she showed me this picture that she'd completed and drawn her own background for. She was most proud of the way she'd drawn the wind and the flower petals blowing through the air, which is totally the best thing about the picture. 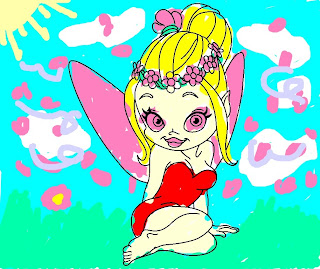 But I also noticed something else. I bet you did too.

And we had a little chat.

First I asked her about the fairy in her picture. "She looks teen-agery," was her first response. When I asked her to explain what that meant, she said, "weelllll, I didn't want to say it but she looks, you know, sexy."

My girl is so savvy.

So we talked about what things made this picture sexy. Not that the fairy has a grown-up woman's body, but that the person who drew the picture decided to draw her a certain way: the dress, the pose, the expression on her face.

Then we looked at these.


Clare didn't see this pose as "sexy," because these pictures weren't "teenagery." That is, these fairies don't have boobs. And I might not have thought so if they weren't so obviously younger versions of the Sexy Fairy above. But that's why it's worse, and more insidious. A grown-up drew these, and made the choices to keep certain features which, on the "teenagery" fairy, are readily identifiable as sexy. The Bratzy bedroom eyes and the pouty full lips. The short skirt and the pose that makes you look right at her almost visible butt.

I mean really. The toddler fairy ought to be in a little magic diaper, not a cocktail party dress and mascara. Good grief.

Not all the choices on this app are this bad. The rest are more ho-hum run-of-the-mill passive-princess bad, but nothing else that's as overtly sexualized as these three. Which means that yes, the people behind the app are aware that it is possible to draw fairy princesses that don't look like they're posing for Playboy. And chose to do it anyway.

When I told Clare that I'd be much more interested in a fairy she drew herself she grinned and immediately went to work.

When she showed me her picture she pointed out proudly that her fairy had a braid and a pretty dress and that she was not at all sexy. Because she's a kid fairy, and kids aren't sexy. 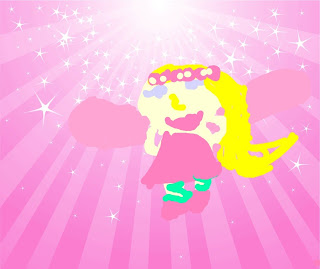