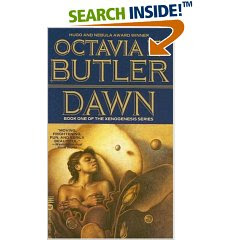 This past week for ED 325, "Science Fiction, Social Criticism and Eschatological Thinking," we read Octavia E. Butler's Dawn, the beginning of her Xenogenesis trilogy. This is a fascinating novel about the posthuman, not least because it recasts the possibility of the posthuman into a fate not necessarily chosen by humanity itself or wrought by human technological achievement.

This is such a departure from the typical portrayal of the posthuman as the monstrous result of out of control (human) technology that it demands scrutiny. Why does Butler reconceive the posthuman in this way, and what does it say about her anthropology?

Throughout the novel Dawn, human beings are portrayed as a species uniquely constituted and conflicted. Twice, human uniqueness is affirmed as the contradiction of being "so full of life and death" at the same time. The Oankali, a three-gendered (male, female and ooloi), non-hierarchical species driven by a need for genetic exchange with nearly all other species they encounter, seem to regard humanity with a mixture of horror and irresistible romantic attraction--a reaction inspired by the uneasy mix of bipolarities that describe human nature. As the plot unfolds, we are given no unambiguously admirable human character (nor, for that matter, any unambiguously admirable alien character); even the protagonist, Lilith, with whom I as a reader sympathized immensely, is not without the flaws that seem to be definitive for human nature for Butler. Violence erupts with a slow, inexorable, tragic inevitability that no amount of foresight on Lilith's part can avoid. Misunderstanding, self-loathing, shame and desire, the need for expiation and punishment--all are incomprehensible to the Oankali, who not only are unified within themselves and never experience such inner conflict, but achieve unity, through the ooloi, with each other that humanity cannot properly conceive and cannot experience except through the ecstasy made possible through union with the ooloi--are presented by Butler as both the human flaws that trigger violence and tragedy, and the defenses which preserve the essentially human, or even the strongholds which enshrine the essentially human, and as that which is endangered by the posthuman future offered by the Oankali through the genetic blending of the two species. To be essentially human, and remain so, is to remain flawed. The dualism of humanity is both its uniqueness and its doom.

This view of humanity is one in which technology can never become a means of salvation, but only a means of destruction. Technology in the hands of fatally flawed humanity can only mean bigger, better, faster and more total means of self-destruction. And indeed, the book begins there: in post-nuclear-war devestation, from which humans must be rescued if they are to survive at all.

It seems logical to expect, then, that the Oankali are god-like beings--and such indeed they are. Personally, I am convinced that the Oankali are not simply god-like, but are Butler's image and theological critique of God--the Christian God--specifically, the Baptist God. The Oankali are a unified three-in-one, a trinity, in which the ooloi (the third gender) act much like the Holy Spirit in Augustine's description of the Trinity, as the "bond of love" between the other two. They are, in comparison to humans, omniscient (or close enough), and they are (or believe themselves to be) benevolent; they are powerful and in control of individual human lives as well as the collective fate of humanity; they make of Lilith a kind of prophetic leader; they intend the transformation of flawed human nature into something better.

And yet the Oankali are not, in contrast to humanity, completely harmonious and unconflicted moral beings. There are disagreements among them as to how to best handle their contact and interaction with humans. They seem to desire, above all, a mutual and reciprocal relationship with humans; but at the same time, they are distant, controlling, manipulative, ostensibly beneficent but unbearably patronizing. And they propose to transform humanity in ways that they refuse to describe, and proceed to do so without anything resembling consent. Lilith, whose relationship with the Oankali is the only one which comes at all close to one of equality and respect, resents the "need-to-know" justification for her ignorance, the callous disregard for her feelings, the deaf ear which the Oankali turn to her well-founded misgivings, and most disturbingly, the physical changes they effect in her without her knowledge. If relationship is indeed their goal, the means by which they try to achieve are incredibly counterproductive. The Oankali, too, are flawed. And this is what I think Butler wants to say about God: that if this is how God deals with humanity, an ostensibly beneficent but unbearably patronizing deity, then God too is flawed.
Posted by JTB at 9:35 AM