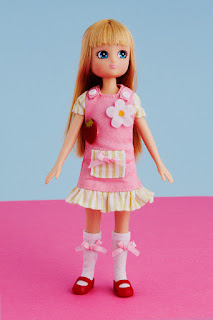 I'm a HUGE fan of Melissa Atkins Wardy of Pigtail Pals and Ballcap Buddies (there's even a widget in the sidebar; if you have kids, check out her really marvelous lines of kid-affirming, gender-stereotype-defying apparel!) and recently she posted a link to this article, about a new doll from a London-based company which (gasp!) decided to make a doll for girls that looked like, um, girls. They even went so far as to (oh my stars and be still my beating heart) "consult with academics" regarding the proportions of an average healthy 9-year-old. So these dolls don't have "breasts or super-skinny waists." Because, you see, your average healthy 9-year-old isn't (brace yourselves, now) proportioned like Barbie. (!!!)

Brava! Brava! Let's see more of this, thank you! Even if I'd like to nitpick on the details, I will absolutely applaud the impulse that says yes, marketing something other than childhood sexualization is a good idea, for companies, for girls, for boys, for parents, for the making of a better world, for everyone, all around.

The end of the article, as Melissa pointed out, seems to take a weird turn. After celebrating this company for its deliberate attention to the issues of early childhood sexualization, the last two paragraphs turn to a spokesperson for the Canadian Toy Association who also happens to be VP of marketing for the folks who make Bratz:


"More traditional companies also think about self-image and have created alternative dolls, said Laura Wiese, spokesperson for the Canadian Toy Association. She pointed to ones that don’t resemble humans, including Monster High and Lalaloopsy dolls.

“There’s a fine line between associating dolls and girls’ body images, we have to be careful,” said Wiese, who is also vice-president of marketing at MGA Entertainment Canada, which makes popular dolls including Bratz."

Here's the line that gets my attention, as an academic who does posthuman stuff: "She pointed to ones that don't resemble humans, including Monster High."

I'm sorry, what? The companies that have thought about self-image and body-image issues and early childhood sexualization have created alternative dolls, for example, MONSTER HIGH?! 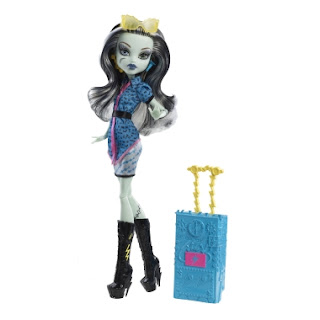 Yeah, that doll bears absolutely no resemblance AT ALL to a sexualized human being, right. No one would ever call this a Monster-ILF or anything.

Here's what I wrote on Melissa's discussion thread:


Re the last 2 paragraphs--I think I just caught Claire McCaskill's whiplash. Monster High? What? I mean, I'd agree that they don't actually resemble human bodies--actual healthy human bodies. But to claim that as an intentional alternative to "traditional dolls?" Pure BS. As someone who actually theorizes on the monstrous/posthuman in an academic context...Monster High is the perfect example of the ambivalence of such figures. They have the potential to be subversive, but that potential can be unrealized and the power of the figures co-opted back into reinforcing the status quo. And that's exactly what the Monster High dolls are: there is no subversion of gender norms there, only reinforcement of them.

Give me a monster doll that defies conventional norms of beauty, femininity, passivity, weakness, submission, sexuality--and then, maybe, we'll have a posthuman figure that can serve as an alternative doll to Barbie. But a Bratz doll in zombie makeup? That's just bullshit.