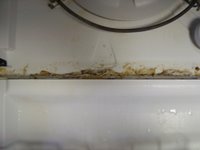 Everyone knows by now that Brent and I are expecting a little addition to the household around the first of June.

What we haven't told anyone is, we've already been living with a third presence in our apartment, for over a year now. Not the cat, you know about her. I'm talking about The Sludge.

We have Sludge. Here's how it came to us. 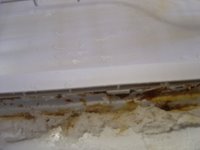 A year and half ago, or so (memory is a bit fuzzy) our dishwasher developed chronic incontinence and started peeing on the floor. So we called maintenance, who showed up promptly, diagnosed this condition as terminal, and installed a new dishwasher. This new dishwasher is a bit smaller than the original one, and of course the racks are arranged differently, but these minor complaints are inconsequential; besides, I'm overjoyed simply to have a dishwasher at all, as we spent the first half of our marriage without this luxury. 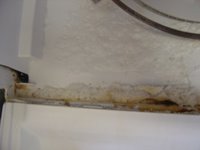 And then we discovered Sludge was living with us. Under the door at the bottom of the dishwasher, just camping out under the little lip where, apparently, rinse water never ventures. Sludge is a collection of soap scum, food particles and greasiness that just sits there beneath our clean dishes and grows and grows, a silent but menacing presence that gives lie to the bright green button on the outside of the new dishwasher that proudly proclaims, "sanitized."

We tried. Oh, we've tried valiantly. We clean out our dishwasher periodically (gross!) but within 2 wash cycles, Sludge is back. It can't be dislodged. Someday, I expect, I'll be unloading the dishes and it will sit up, blink at me, start beating a drum and chanting, "We're Filth! We're Filth! We come from filth, we're going to filth!" (Obviously at that point maintenance will not be who I call. Where oh where is that apotheosis of cool, the Sewer Urchin, when I desperately need him???)

Anyhow, we managed to make it so far by just ignoring it most of the time and cleaning it when necessary. (For those of you who have dined at our house, I hope you're not feeling traumatized at this point.) But now...well, it's funny how having a kid changes your perspective all the way down. Brent and I can live with the indignity and questionable sanitariness of Sludge, but should Baby _______? So Friday morning, after unloading the dishwasher and feeling mightily disgusted with Sludge, I decided enough was enough. I got out the digital camera and took several pics of our offensive house un-guest, and emailed them to the head of the maintenance dept., with an explanation that I simply can't imagine trying to sanitize bottles in a dishwasher with Sludge living in it (I'm planning to breastfeed, anyway, but the point is, why should Baby ____'s first companion be Sludge?).

I received a prompt reply and Monday someone came out to look at it. They want to try cleaning it with some kind of mighty cleaner and see if that helps (it won't), but we've been promised: if they can't get rid of Sludge, we will get a new dishwasher. Again.

Yes, the anticipated presence of Baby ________ will give a whole new light on many things. But believe me, at first you'll be exteremly concerned with making sure everything that enters Baby ______'s mouth is clean. But soon you'll be glad if the container got a decent rinsing before it gets re-used.

But do use her as leverage for as long as you can. There's something undeniable about a baby.

That is so gross! If you don't get satisfaction let Nana at them!

Ew!!! I didn't know about Sludge when I was at your place. Gross!

1) Gross.
2) Anytime a reference to "The Tick" is made in a post, the person making the reference is thereby rendered automatically cool. As if you weren't already cool. Seriously though, the Sewer Urchin--that's awesome.
3) Your wee one will produce unholy creatures far worse than any Sludge, and no maintenance dude will be able to help you. But, that's why mother's saliva was created--to clean up anything. Try spitting on Sludge and see if it goes away.

Ugh, I think if I tried to work up any maternal saliva for Sludge that it would turn into something far worse.

Thanks for catching the Tick reference. Must give credit to MOM for being cool enough to buy me the entire set of Tick episodes of the internet for Christmas a few years back...

Sorry, TKP. In the interest of seriously overdoing my cool quote-iness, "what the eye don't see the chef gets away with..."

Maybe my dishwasher is related to yours. Every now and again mine sneezes and wets itself all over the floor. Maybe it has had a baby!

I wish I didn't understand that comment as well as I do.

Or maybe you'll move to a 2-bedroom.
Yuck-o.

I’m very glad to found this website because; it carries awesome and actually good data in favor of readers.

I really enjoyed reading your article. I found this as an informative and interesting post, so i think it is very useful and knowledgeable. I would like to thank you for the effort you have made in writing this article.

I use a bottle brush and a little liquid dish detergent to gently brush back and forth under the door from one side to the other. I do this several times a week. Its takes just a minute, but there is no more nasty and disgusting accumulation of whatever greasy moldy smelly . . . . ness!

Good day! I found your site very interesting and informative . Thanks for taking time sharing it with us. I really enjoyed reading your post.

This is just the information I am finding everywhere. Thanks you, I just subscribe your blog.